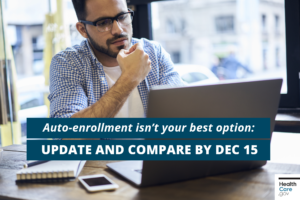 As of Saturday, Dec. 2, Obamacare enrollment on the federal marketplace had reached 3.6 million with two weeks remaining before open enrollment closes on Dec. 15.

A total of 823,180 people during the week ending Dec. 2 signed up for an insurance plan sold on HealthCare.gov, which serves most of the United States, according to  Centers for Medicare and Medicaid Services (CMS) officials.

In comparison, through Dec. 10 last year, some 4.02 million had signed up, and that year enrollment ended a month later, on Jan. 15.

Obamacare advocates worry that this year’s enrollment will not match 2016’s total of 9.2 million sign-ups for a variety of reasons, including drastic cuts to the advertising and promotional budget for the program. They also fret that many customers are unaware of the shortened enrollment period this year (though some states that offer their own online marketplaces have longer deadlines.)

“While cumulative enrollment totals remain ahead of past years, the pace of enrollment has slowed dramatically,” watchdog group Get America Covered said in a blog post on Medium.com

Unless Congress drops the individual mandate in connection with its tax reform effort, those who don’t have insurance starting Jan. 1 will face a fine of $695, or 2.5 percent of household income.

The Senate version of tax reform includes a provision doing away with the individual mandate in the Affordable Care Act (ACA), but the House version does not. House and Senate conferees are now working on merging the two bills. Many observers expect the final version to include the elimination of the mandate.