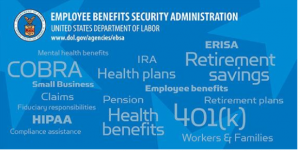 The Employee Benefit Security Administration (EBSA) in 2017 upped its recovery of missing employee retirement contributions (including fines) to $1.1 billion from $777.5 the year before.

The automation came about through the use of algorithms to sort through filed Forms 5500, the yearly report companies must make on their benefits programs.

Another factor in the improved recovery amount was an increase in fines that took place in August 2016. Failure to furnish a statement of benefits to employees increased from $11 to $28 per employee. The fine for failing to file Form 5500 went from $1,100 per day to $2,063. Some 14 other fines were also increased.

Of the 2017 $1.1 billion recovery figure, $682.3 million was recovered from enforcement actions; $418.7 million came from what DOL calls “informal complaint resolution”; $27.9 million was part of EBSA’s Abandoned Plan Program; and $10 million came from EBSA’s Voluntary Fiduciary Correction Program, which allows employers to avoid ERISA penalties if they comply with regulators.

EBSA says size of the institution doesn’t matter. The algorithm flags businesses whenever it spots an irregularity. Also on the hunt is a team of in-house “benefit advisers,” or auditors, who scour documents for signs of malfeasance or mistake. There is also a team of inspectors who will visit the physical businesses to conduct further investigations.

ERISA refers to the Employee Retirement Income Security Act, for which the EBSA is the policing and enforcing agency. According to the EBSA section of the Department of Labor’s website:

The provisions of Title I of ERISA, which are administered by the U.S. Department of Labor, were enacted to address public concern that funds of private pension plans were being mismanaged and abused. ERISA was the culmination of a long line of legislation concerned with the labor and tax aspects of employee benefit plans. Since its enactment in 1974, ERISA has been amended to meet the changing retirement and health care needs of employees and their families. The role of EBSA has also evolved to meet these challenges.