SCOTUS Sides with Employers in the Use of Forced Arbitration Agreements 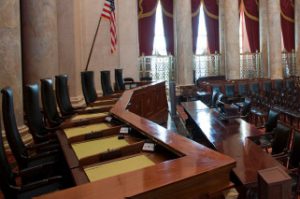 The ruling allows employers to require employees to sign not only binding arbitration agreements that include class action waivers, but also non-disclosure agreements.

“The policy may be debatable but the law is clear: Congress has instructed that arbitration agreements like those before us must be enforced as written,” Justice Neil Gorsuch wrote for the majority. Justices John Roberts, Anthony Kennedy, Samuel Alito and Clarence Thomas concurred.

The legislation in question dates to 1925 with the passage of the Federal Arbitration Act, which states that arbitration agreements “shall be valid, irrevocable and enforceable.” Arbitration is done outside a courtroom and is quicker and cheaper and generally viewed as more employer-friendly than courtroom litigation.

“This Court has never read a right to class actions into the NLRA — and for three quarters of a century neither did the National Labor Relations Board [NLRB],” wrote Justice Gorsuch. The NLRB argued before the court in favor of employee class actions.

After the decision, the NLRB released a statement, which read in part: ” The National Labor Relations Board respects the Court’s decision, which clearly establishes that arbitration agreements providing for individualized proceedings, and waiving the right to participate in class or collective actions, are lawful and enforceable. ”

Today’s ruling, involving three separate cases, was limited to wage-and-hour disputes, leaving open the question of class action lawsuits for other areas of employment law such as discrimination.

“The inevitable result of today’s decision will be the under-enforcement of federal and state statutes designed to advance the well-being of vulnerable workers,” Ginsburg wrote, calling on Congress to pass legislation to override the decision.

Labor activists were quick to condemn the decision.

“It is essential to both our democracy and a fair economy that workers have the right to engage in collective action,” said Celine McNicholas, director of labor law and policy at the Economic Policy Institute (EPI). “Congress must act to restore this fundamental right and ban mandatory arbitration agreements and class and collective action waivers.”

The ruling will affect some 25 million U.S. workers but not those in unionized companies, who retain the right to collectively bargain and seek redress.

POSTSCRIPT: The Supreme Court is yet to rule on whether workers can pursue their claims through class-wide litigation when the underlying arbitration agreement is silent on the issue; i.e., it includes no class action waiver clause. The case in question, which the court has agreed to review, is Varela v. Lamps Plus, Inc. The 9th U.S. Circuit Court of Appeals ruled that the plaintiff could proceed with a class action lawsuit given the absence of a waiver in his arbitration agreement.