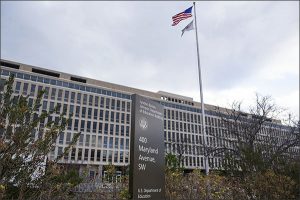 In a long-rumored move, President Trump during a White House staff meeting today proposed merging the Departments of Labor (DOL) and Education (DOE) into a single branch to be known as the Department of Education and the Workforce.

Efforts in the past to do similar agency reshuffling have been ignored by the Congress, which must approve any such change. In 2017, the Trump administration proposed merging the Office of Federal Contract Compliance Programs (OFCCP) into the Equal Employment Opportunity Commission (EEOC), but the idea got virtually nowhere in Congress.

As a result of the Workforce Innovation of Opportunity Act (WIOA) of 2014, Labor and Education are split operating 33 job training and education programs. An earlier, less radical plan would have simply merged overlapping programs in the two agencies.

Labor Secretary Alexander Acosta himself has previously called on his Employment and Training Administration (ETA) to improve coordination with the Education Department in ensuring quality of these programs. ETA currently operates both the Job Corps and YouthBuild.

Currently, the Education Department is funded at almost $70 billion and employs nearly 4,000 people. The DOL, with a staff nearing 18,000, operates on a budget of a little more than $12 billion.

The departmental merger is part of the broader plan being pushed by Office of Management and Budget (OMB) Director Mike Mulvaney called “Delivering Government Solutions in the 21st Century.” His blueprint would also privatize the postal service and shrink the Office of Personnel Management (OPM).

Trump, in a March 2017 executive order titled the “Comprehensive Plan for Reorganizing the Executive Branch,” called on the OMB to report whether “some or all of the functions of an agency, a component, or a program are redundant, including with those of another agency, component, or program.”