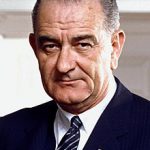 On July 2, 1964, President Lyndon B. Johnson signed the historic Civil Rights Act, which to this day protects against discrimination in  in employment, education and housing; bars racial segregation in all state-sponsored public places such as schools, buses, parks and swimming pools; and outlaws discrimination based on race, color, religion or national origin in hotels, motels, restaurants, theaters, and all other public accommodations engaged in interstate commerce, exempting only private clubs without defining the term “private.”

With social media only a fantasy at the time, the nation’s three television networks covered the signing live in the East Room of the White House. President Johnson used 80 monogrammed pens to sign the legislation, he gave away as mementos of the historic occasion, in accordance with tradition.

“If government is to serve any purpose, it is to do for others what they are unable to do for themselves,” Johnson proclaimed.

The legislation had been part of John F. Kennedy’s platform when he successfully ran for president in 1960. Following Kennedy’s assassination in 1963, Johnson made civil rights a priority of his new administration, but the act had to endure an 88-day filibuster by Southern Democrats to see its way to passage.

The act was declared constitutional by a unanimous vote of the Supreme Court on Dec. 14 of the same year.

The following year saw the enactment of the Voting Rights Act, another landmark piece of legislation.