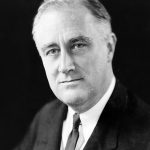 The NLRA is also known as the Wagner Act in honor of its principal author and sponsor, Sen. Richard Wagner of New York

According to the NLRB website, the NLRA was enacted “to protect the rights of employees and employers, to encourage collective bargaining, and to curtail certain private sector labor and management practices, which can harm the general welfare of workers, businesses and the U.S. economy.”

Republicans and business groups were almost unanimously opposed to the legislation, which to them reeked of “socialism.” Scores of measures were introduced in Congress to gut the NLRA, but if they ever made it to Roosevelt’s desk, he would veto them without hesitation. Some of the animus was muted in 1937 when the Supreme Court upheld the constitutionality of the act.

It wasn’t until 1947 under a Republican Congress that the NLRA was reined in a bit by the Taft-Hartley Act. The NLRB site explains that “Taft-Hartley defined six additional unfair labor practices, reflecting Congress’ perception that some union conduct also needed correction. The act was amended to protect employees’ rights from these unfair practices by unions.”