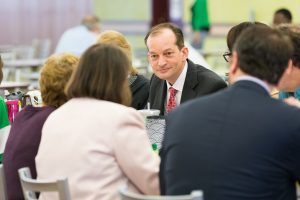 The Department of Labor (DOL) initially said it expected to release a Notice of Proposed Rulemaking (NPRM) on overtime in January, but in its just-released fall regulatory agenda, that date has been pushed back until March.

The agenda says the NPRM “will propose an updated salary level for exemption and seek the public’s view on the salary level and related issues.”

The current overtime rules on the books date to 2004 and the George W. Bush administration, and those were an update from the previous rules, which were issued in 1975.

The Barack Obama administration took a stab at rewriting the rules, which included a provision raising the salary threshold for overtime pay exemption to $47,476 a year (currently $23,660). But a federal district judge in Texas, just days before the Dec. 1, 2016 start date of the new rules, issued a nationwide injunction, questioning among other things if the DOL had the authority to use salary as a determinant.

When the Trump administration took over in 2017, that judge’s injunction was up for review by the 5th U.S. Circuit Court of Appeals in New Orleans, but Trump’s Department of Justice (DOJ) chose not to defend the appeal initiated under Obama. However, it later asked the court for clarification on whether using a salary threshold is permissible.

During his confirmation hearings, current Labor Secretary Alexander Acosta indicated he would favor a threshold somewhere in the mid-$30,000-a-year range. More recently, he has indicated an openness for regional variations on the threshold and even industry variations to protect non-profits and small mom-and-pop businesses.

All this being said, after the NPRM is issued, there will be a public commentary period during which hundreds of thousands of comments are expected. Then the DOL must craft a final rule and send it to the Office of Management and Budget (OMB) for approval.

So when will the new rules take effect? Most observers say the most logical start day would be the beginning of 2020 to give employers plenty of time to ramp up.

We’ll just have to wait and see. Rulemaking can take months and even years.