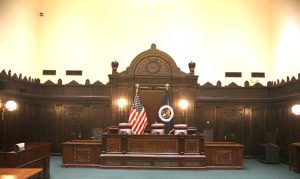 Attorneys General from 16 Democrat-leaning states and the District of Columbia have filed an appeal to overturn U.S. District Judge Reed O’Conner’s Dec. 14 ruling that the Affordable Care Act (ACA, or Obamacare) is unconstitutional now that the individual mandate “tax” has been eliminated.

California Attorney General Javier Becerra, leading the charge, claimed  the ruling is “reckless,” “ludicrous” and based on a “flimsy” legal theory.

At a White House Cabinet meeting the same day, President Trump declared, “That case from Texas should win in the Supreme Court.”

The appeal comes just days after Judge O’Conner on Sunday ruled that the ACA should stay in legal effect while the appeals process plays out.

Thursday’s legal action consisted of a one-paragraph notice of appeal filed with the 5th U.S. Circuit Court of Appeals, which has jurisdiction over Judge O’Conner’s court in Ft. Worth, Texas. By all accounts, the 5th circuit court is a bastion of conservatism, so the case could well end up before the Supreme Court, as President Trump declared.