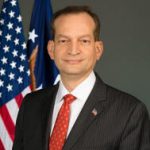 Two years after an executive order by President Trump asked the Department of Labor (DOL) to develop an apprenticeship program, the department this morning finally announced it had issued a Notice of Proposed Rulemaking (NPRM) to accomplish that very goal.

The NPRM, according to the department, establishes a process for the U.S. Department of Labor to advance the development of high-quality, industry-recognized apprenticeship programs (IRAPs).

The DOL further announced awards totaling $183.8 million to support the development and expansion of apprenticeships for educational institutions partnering with companies that provide a funding match component.  The department will also make available an additional $100 million for efforts to expand apprenticeships and close the skills gap.

“The apprenticeship model of earning while learning has worked well in many American industries, and today we open opportunities for apprenticeships to flourish in new sectors of our economy,” U.S. Secretary of Labor Alexander Acosta said.  “With 7.4 million open jobs and job creators searching for skilled job seekers, apprenticeship expansion will continue to close the skills gap and strengthen the greatest workforce in the world – the American workforce.”

Under the proposed rule, entities such as trade, industry, and employer groups or associations, educational institutions, state and local government entities, non-profit organizations, unions, or a consortium or partnership of these entities could become a Standards Recognition Entity (SRE) that sets standards for training, structure, and curricula for IRAPs in relevant industries or occupational areas.

The SREs would be recognized tby the DOL to ensure that its requirements are met, resulting in only high-quality IRAPs.  This is a similar relationship to the one that exists between the Department of Education and higher education accrediting bodies.

Tomorrow, the DOL says it will issue a revised Training and Employment Notice that will subsequently be accompanied by an application for entities seeking to recognize IRAPs.