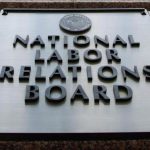 The Republican board majority adopted a “contract coverage” or “covered by the contract” standard for determining if such unilateral actions run counter to the NLRA. In so doing, the board rejected the “clear and unmistakable waiver” standard, which it said had been ” rejected by several federal courts of appeals, notably including the Court of Appeals for the District of Columbia Circuit.”

The decision yesterday ruled that changes could be allowed over a union’s objection if they could reasonably infer as allowable under the “plain terms” of the contract.