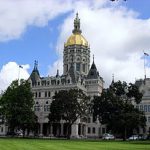 Connecticut Gov. Ned Lamont has pledged to sign legislation passed Friday that would raise the state’s minimum wage in stages to $15 an hour in 2023. The move affects about 330,000 state workers.

The eventual minimum wage would represent about $31,000 a year for a full-time worker, as opposed to an annual wage of about $21,000 under the current standard.

The bill also contains provisions to prevent businesses from replacing older workers with younger, less expensive workers, and also to provide a training wage of $10.10 per hour for workers aged 16 and 17 who work less than 90 days per year.

The House passed the bill after an all-night session that lasted 14 hours. The Senate began debate at 8:30 p.m. Thursday (May 16) and ended it at 2:45 a.m. Friday (May 17).  Both votes turned out to be along party lines, with Democrats in favor and Republicans opposed on grounds that the increase would hit Mom-and-Pop businesses hard.