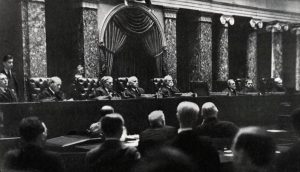 This 1932 photo of the Supreme Court, taken by a camera smuggled into the courtroom, is one of only two known to exist. Photography in the chamber is forbidden.

The Supreme Court opened its 2017-2018 term by taking up a case involving some 25 million workers. At issue was whether workers could be contractually forced to use binding arbitration with class action waivers for employment issues rather than being allowed to take collective legal action.

Judge Neil Gorsuch, in his first full term, sat silently while a lively debate seemed to split between the liberal and conservative wings of the bench. In an interesting twist, two government agencies took contrasting positions. Lawyers for the Justice Department argued the business case (keep the arbitration), while lawyers for the National Labor Relations Board took the employees’ side.

Justice Ruth Bader Ginsburg, seeming to speak for the court’s liberal wing, noted, “You have to protect the individual worker in a situation where he can’t protect himself.”

Chief Justice John Roberts, on the other hand, worried that voiding binding arbitration “would invalidate contracts for 25 million employees.”

On Tuesday, the court will take up the issue of electoral districting, specifically whether districts can be drawn in favor of the ruling party.

Today, according to the U.S. Constitution, the high court began its new term at 10 a.m.