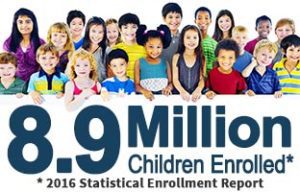 With seven states having nearly exhausted their funds for the program, a Congressional continuing resolution to fund the federal government through Feb. 8 has breathed new life into the Children’s Health Insurance Program (CHIP) to the tune of six years of guaranteed funding.

The deal has been on the table since last week, but on Friday squabbling over how to deal with the Deferred Action for Childhood Arrivals (DACA) program sank any chance of passing the budgetary resolution (which was then for four weeks’ duration, not three).

After almost three days of a government shutdown, Senators today hatched a new agreement that includes the CHIP funding. DACA remains on the table amid assurances that there will be open debate on the issue.

CHIP funding ran out 114 days ago when its last budgetary authorization expired with the close of the federal fiscal year on Sept. 30. As states started to run low on funds (Connecticut and Alabama threatened in December to shutter their programs if funding weren’t forthcoming), Congress passed a stopgap measure to help the neediest states.

CHIP, which enjoys widespread bipartisan support, was created in 1997 through a measure introduced by Sen. Ted Kennedy (D.-Mass.) and Sen. Orrin Hatch (R.-Utah). It currently provides funding for some 9 million children who otherwise would be uninsured or vastly under-insured.

Both the Senate and the House are expected to approve the budget resolution and send it to President Trump for his signature tonight.

If your children need health coverage, they may be eligible for the Children’s Health Insurance Program (CHIP). If they qualify, you won’t have to buy an insurance plan to cover them.

CHIP provides low-cost health coverage to children in families that earn too much money to qualify for Medicaid. In some states, CHIP covers pregnant women. Each state offers CHIP coverage, and works closely with its state Medicaid program.

Each state program has its own rules about who qualifies for CHIP. You can apply right now, any time of year, and find out if you qualify. If you apply for Medicaid coverage to your state agency, you’ll also find out if your children qualify for CHIP.