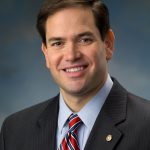 This is essentially the same plan that First Daughter Ivanka Trump has been pushing and managed to have a Senate hearing on in July.

“This is important legislation. It is also unique,” Rubio said at a news conference at the Capitol. “This is a dramatic readjustment of the way we deal with economic insecurity in the modern era.”

Democrats in the Senate — not surprisingly given the author of the bill — have already lined up solidly against the proposal.

As for author Ivanka, she downplayed the chances of the legislation’s being passed before the midterm elections:

“This was not exactly part of the Republican lexicon when we arrived in D.C. in January 2017.”

“Really at this point we’re curating ideas with the hope of being able to build consensus, but it will take time,” she added. “I’m cautiously optimistic that it can happen next year.”

The Rubio/Trump legislation limits the leave for births and adoptions, unlike the Family and Medical Leave Act (FMLA), which also covers time off to care for sick family members, or for oneself.

“This proposal forces workers into an impossible position: If they need to cover a medical emergency today, then their Social Security benefits get cut when it’s time to retire,” Sen. Kirsten Gillibrand (D-N.Y.) said in a statement about the bill. “If they need to take care of a sick or dying parent, as three out of four people who need paid leave would use it, they get nothing.”

Rep. Ann Wagner (R-Mo.) introduced a companion bill in the House. Rubio introduced his legislation without a single cosponsor.