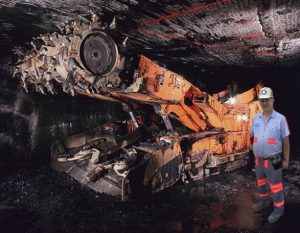 A continuous mining machine and miner.

The Mine Safety and Health Administration (MSHA) has announced a final rule that will strengthen protections for miners on the working section of underground coal mines by reducing the potential for pinning, crushing or striking accidents.

Since 1984, there have been 35 deaths where miners have been pinned, crushed, or struck by continuous mining machines in underground coal mines. MSHA projects that the rule will prevent 49 injuries and 9 deaths over the next ten years.

The rule requires operators of underground coal mines to equip place-changing continuous mining machines with proximity detection systems, which use electronic sensors on both mining machines and miners to detect motion or the location of one object relative to another. Certain operational standards must be met. For example, the system must include audible and visual warnings and cause machines to stop before contacting a miner.

The rule takes effect March 16, 2015, and will be phased in over 8 to 36 months. Based on manufacturer information, nearly half of the continuous mining machines in operation — 425 of approximately 863 — are equipped with proximity detection systems. Most will meet the provisions of the final rule with only minor system changes, such as adding warning signals.

Wielding a large rotating steel drum equipped with tungsten carbide teeth, a continuous mining machine scrapes coal from its seam and loads it onto conveyor belts or coal haulers like shuttle cars for transport to the surface. As it maneuvers from one place to another in a confined underground area, the massive machine leaves little room for miners in its path. It’s one of the most efficient methods for extracting coal, yet not without its risks. In fact, since 1984, 35 coal miners have died in accidents in which they became pinned, crushed or struck by these machines.

To combat these kinds of accidents, MSHA collaborated with the mining industry, manufacturers and others to develop a technology that uses electronic sensors to detect motion or the location of one object relative to another. These systems can be programmed to send warning signals and stop machines before they injure or kill miners working in the confined space of a coal mine.