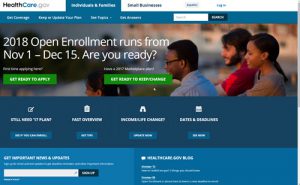 The Department of Health and Human Services (HHS) has issued a report “on qualified health plans (QHPs) available in the Exchange for states that use the HealthCare.gov platform, including estimates for issuer participation, health plan options, premiums, and subsidies in the upcoming open enrollment period (OEP), and trends since the first OEP.”

The ACA marketplaces are now open.

In a nutshell, premiums are up on average 37 percent, while the total number of insurance companies participating has fallen to 132 from 167 during last year’s open enrollment. (The highest level — 217 — was reached in 2015.) The good news is that subsidies will also rise on average to $555 per month from $382, thereby offsetting the premium increase for those who qualify for subsidies.

This year’s open enrollment has been truncated from 90 to 45 days and will close on Dec. 15 rather than Jan. 31, as it has previously. A bipartisan bill in the Senate that would extend the enrollment until the traditional cutoff date and would also restore cost-sharing reduction (CSR) payments to insurers is stalled. lt may resurface in a final budget reconciliation bill in December.

Earlier efforts to “repeal and replace Obamacare” have come up short in Congress, the last time by one vote in the Senate.