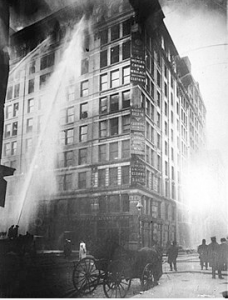 It was a Saturday in New York City 108 years ago today — March 25 — when fire engulfed by Triangle Shirtwaist Factory, leaving 146 workers dead, some as young as 13.

The factory employed mostly young immigrant women sewing garments in harsh conditions with scant pay to show for it.

The fire started toward the end of the work day, beginning in a rag bin and spreading rapidly through the three top floors of the of the 10-story Asch Building, which housed the sweatshop.

Some women made it to the external fire escape, but it collapsed from the weight and plunged the women to the street below. The owners had locked the doors to prevent theft, so the only other way out was by jumping from a window — to one’s death.

Worse, fire equipment in those days could reach only seven stories up despite the number of skyscrapers in the city, and sprinkler systems were not mandatory. In fact, fire codes were nonexistent.

The owners, Isaac Harris and Max Blanck, escaped from their 10th floor office by ascending to the roof and jumping to a nearby building.

The fire that day changed the face of safety laws in the United States. The city appointed a commission to look into factory conditions. During the next eight years, the commission inspected 1,836 industrial establishments and heard from 222 witnesses. The group shockingly found that 14 New York industrial buildings didn’t even have fire escapes.

The Triangle owners were acquitted of all charges and received a handsome fire insurance payout. Families of the dead received settlements approaching $75 per worker. The Asch Building is now the Brown Building on the campus of New York University.