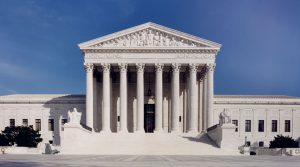 An upcoming potential Supreme Court case, which will require reviewing a decision by the 11th Circuit Court of Appeals, could help reconcile the different opinions by the Department of Justice (DOJ) and the Equal Employment Opportunity Commission (EEOC) regarding sexual orientation and whether it is protected under the Civil Rights Act of 1964.

At least, that’s the hope of Acting EEOC Chair Victoria Lipnic, who told a gathering of attorneys this week: “It is certainly an unusual position for the federal government to have these different interpretations.” To wit:

The EEOC holds that sexual orientation is protected under the law’s category of sex, and the DOJ — reversing an Obama-era opinion — says the statute does not because it lacks the specific language of sexual orientation. Since 2013, the EEOC has argued its position on sexual orientation and civil rights. Attorney-General Jeff Sessions just this month argued the opposite in a memo to his attorneys and agents.

More than 70 highly recognizable companies nationwide have urged the justices to take up the case and also argued that sexual orientation should be recognized under civil rights law. Neither the Justice Department nor the EEOC has so far filed a brief in the case, which is still pending and not yet on the court’s agenda.

Lipnic is a holdover appointee from the Obama era, and was for a while the lone Republican voice. However, two more Republicans will be joining the commission soon: Janet Dhillon and Daniel Gade. Dhillon will become the full-time Chair once her nomination is confirmed by the Senate.