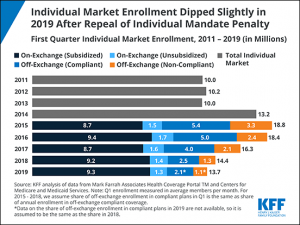 From a peak of 18.8 million in 2015  — the first year of Obamacare — the number of Americans enrolled in individual marketplace health insurance policies has dropped to 13.7 million, most of the decline stemming from the non-Obamacare exchanges.

Following the zeroing out in 2019 of the individual mandate penalty — buy insurance or pay a fine — 651,000 enrollees dropped coverage in the private exchanges, while enrollment in Affordable Care Act (ACA, or Obamacare) policies remained fairly stable at 10.6 million.

The figures were released yesterday by the Kaiser Family Foundation, which said its “analysis provides an early look at how the market is working following recent policy changes that some argued would spark dramatic upheaval among consumers who buy their own health insurance either through the Affordable Care Act’s marketplaces or through off-exchange plans..”

Of the 10.6 who purchased insurance this year on the ACA exchanges, 9.3 million receive government subsidies that can drastically lower their monthly premiums.

The exchange policies, both public and private, account for just a small fraction of the 150 million Americans who receive health coverage through their jobs.