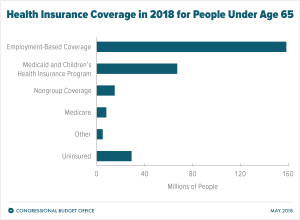 The federal government subsidizes health insurance for most Americans through a variety of programs and tax provisions. In 2018, net subsidies for non-institutionalized people under age 65 will total $685 billion, the Congressional Budget Office (CBO) and the staff of the Joint Committee on Taxation (JCT) estimate.

That amount includes the cost of preferential tax treatment for work-related insurance coverage, the cost of Medicaid and Medicare coverage for people under age 65, and government payments for other kinds of health insurance coverage—such as plans purchased through the marketplaces established under the Affordable Care Act (ACA).

Their published report describes the basis for the CBO’s baseline projections of the federal costs for those subsidies under current law for the 2018–2028 period. Those projections of costs are built upon estimates of the number of people with health insurance of various kinds. During the coming year, the CBO and JCT will use their projections as the benchmark for assessing proposed legislation’s effects on the subsidies.

How Many People Under Age 65 Are Projected to Have Health Insurance?

According to CBO and JCT’s estimates, a monthly average of about 244 million non-institutionalized civilians under age 65 will have health insurance in 2018. About two-thirds of the insured population under 65 will have coverage through an employer, and roughly a quarter will be enrolled in Medicaid or the Children’s Health Insurance Program (CHIP).

A smaller number will have non-group coverage, coverage provided by Medicare, or coverage obtained from various other sources. For example, about 4 percent, or 9 million people, are projected to obtain coverage through the ACA marketplaces.

On average throughout the year, about 29 million people — 11 percent of all non-institutionalized civilians younger than 65 — will be uninsured in 2018, the CBO and JCT estimate. Between 2018 and 2019, in the agencies’ projections, the number of uninsured people will rise by 3 million, mainly because the penalty associated with the individual mandate will be eliminated and premiums in the non-group market will be higher. The elimination of the penalty was enacted as part of Public Law 115-97 (originally called the Tax Cuts and Jobs Act).